Ball Colours – what do they mean?

Ball Colours Explained! The ball colours we reference throughout our website and Junior Coaching Curriculum can be confusing, so we have explained more below. Red Ball (5 – 8 year olds) Red Ball tennis is where a lot of children start their tennis journey! It is a decompressed ball so that it doesn’t bounce above shoulder height of a 5 – 8 year old. It’s played on a mini court, they are usually marked across the width of a full sized court and you can fit two on one side of the main net. At this stage children develop tracking… 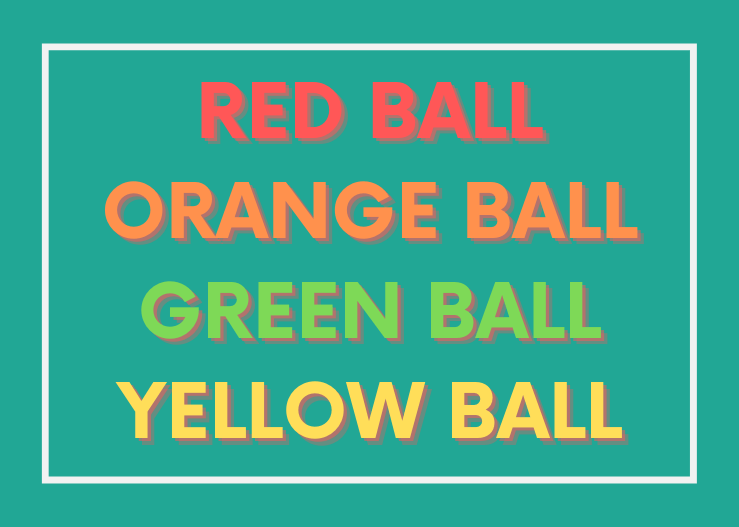 The ball colours we reference throughout our website and Junior Coaching Curriculum can be confusing, so we have explained more below.

Red Ball tennis is where a lot of children start their tennis journey! It is a decompressed ball so that it doesn’t bounce above shoulder height of a 5 – 8 year old. It’s played on a mini court, they are usually marked across the width of a full sized court and you can fit two on one side of the main net.

At this stage children develop tracking skills and hand eye coordination to enable them to use a racket correctly. They learn to serve and rally and score on their mini court! A Red Ball match is tie-break scoring to 10 points! When we play team Red Ball matches against other clubs we have four players and they all play every member of the other team in a match to 10 points! There are always biscuits and a drink after team matches!

It’s amazing what the young children can do on a mini court with Red Balls – if you’re child is really enjoying their tennis and can have a little rally over the net of 2 or 3 balls let us know because our brilliant coach Tom organises some extra practices where they can learn to play matches!

U8 Red Ball matches are a match tie-break which is a tie break to 10 points and win by 2 clear. In a team match all four children play four mini red matches. Children must know which side to serve and return from.

Orange balls are decompressed so that they doesn’t bounce above shoulder height of most under 9’s. It is lighter so that children can develop very good technique at a young age and the court is a smaller area for them to cover.

A key point is that before the age of 8 children should have learnt basic tracking skills, catching, throwing, turning, hitting…with the Red Balls. If you give them the chance to do this at an early age the rest of tennis will be SO much easier and when they reach Orange ball they are then at an age when they have the capacity to play points and understand tactics – all relative to how much they have played of course.

Orange Ball Team matches involve two singles matches and one doubles match. Each match is the best of 3 sets, but a set at orange ball level is actually a 7 point tie-break and they must win by 2 points. In a team match they play 2 singles and 1 doubles. Children must know which side to serve and return from. The children enjoy being able to develop tactical awareness with more space on the court as well as beginning to understand the game of doubles!

Green balls are used for 10 and under players. They are still decompressed like the red and orange but to a lesser extent. The children play on a full sized tennis court at this stage but for doubles the court is still the same and does not include tramlines! Green balls are also brilliant for beginners at any age even adults to help develop technique and timing.

When matches are played with green balls they use normal tennis scoring, 15, 30, 40 etc and they play sets to 4 games instead of 6. So there are lots of aspects that are very close to a normal match but with some limitations to make it manageable for their size and strength! Children will usually now be using a 26 inch racket, and some children will move to a full size 27 inch racket at this time if they are strong and have played a lot.

Our Green ball children who play on our teams work on trying to develop their movement and split steps! Watching tennis is a great way to learn, why not practice the split steps while watching matches pretending to be one of the players! Its actually quite fun and something any child could give a go!

U10 Green Ball matches are called Fast-4 scoring (a short set to 4) and is best of three sets. Sets are short sets with normal tennis scoring to four games. If they get to 3 – 3 they play a 7 point tie break to see who wins that set and at 40-40 (deuce) they play a sudden death point instead of deuce-advantage. In a team match they will play one singles and one doubles.

Following these stages above children will move onto playing tennis with yellow balls.

We get children beginning tennis at different ages. If they have started the pathway young then tennis at the yellow ball stage is all about fine tuning technique, developing movement and building their tactical game. It is also working with their strengths and weaknesses to develop their game.

If children/teens come to tennis at an older age then on the yellow ball we will be developing some of the skills covered in Orange and Green. If a child has played many other ball sports or did tennis for a period of time when they were very young then they will find it much easier to develop their tennis technique!

11+ Normal Tennis scoring. Sometimes the Fast-4 format will be used as in the green ball so that more matches can be played.

This website uses cookies to improve your experience while you navigate through the website. Out of these cookies, the cookies that are categorized as necessary are stored on your browser as they are essential for the working of basic functionalities of the website. We also use third-party cookies that help us analyze and understand how you use this website. These cookies will be stored in your browser only with your consent. You also have the option to opt-out of these cookies. But opting out of some of these cookies may have an effect on your browsing experience.
Necessary Always Enabled
Necessary cookies are absolutely essential for the website to function properly. This category only includes cookies that ensures basic functionalities and security features of the website. These cookies do not store any personal information.
Non-necessary
Any cookies that may not be particularly necessary for the website to function and is used specifically to collect user personal data via analytics, ads, other embedded contents are termed as non-necessary cookies. It is mandatory to procure user consent prior to running these cookies on your website.
SAVE & ACCEPT

Find out what's happening in tennis, at the club and what coaching sessions are available.

Something went wrong. Please check your entries and try again.
Scroll to Top